Let's stop the steps towards the privatization of healthcare

The degradation of healthcare in context.

Public services such as health services, education, nurseries, social support or nursing homes are part of the salary that we as workers receive collectively. So are pensions and unemployment benefits. They are not free services, but part of our salary that has been previously deducted from us in the form of social insurance’s contributions or taxes. Most of it comes from our own contributions in the form of  income tax, VAT or special taxes. But it also comes from taxes and contributions applied to companies or capitalists to redistribute part of the work generated by us that they appropriated during the production process.

We cannot understand our salary without taking into account that the struggle of other workers in the past achieved the collectivization of all these services and benefits. If each worker had to pay for these expenses individually by hiring them to private companies -which only provide them if there is a benefit-, our living standard would go back a hundred years. Imagine having to mortgage your house (if you are lucky enough to have one) to be treated for cancer or losing all your retirement  benefits if a stock market crash drains your pension fund. Unfortunately, there are already battles that many workers have given up for lost, such as the possibility that our older children receive university education or that the youngest kids or our elderly parents receive adequate care while we are working.

Employers know perfectly well that these public services and benefits are wages, even if they are indirect or deferred. That is why their main objective is to reduce them as much as possible: reduce the amount of our pensions or the time that we enjoy them, reduce the quality and access to healthcare, reduce the number of places at day care centers or  public nursing homes, etc. When something cannot be removed from the public offering (at least for the moment), the alternative for them is that the service is offered by a private company instead of public employees. In this way, that service begins to generate private profit while they manage to eliminate it completely.

Privatization and degradation of public services are not happening because politicians are corrupt and want to give the business to their friends or relatives. Of course there will always be many corrupt, and if they decided to privatize, why not "giving away" the service to a friend’s company? However that is not the reason, but the means. The objective is a class objective, not a particular one, because after this privatization the service will remain indefinitely as another commodity that will generate benefits for the capitalist class.

The parties that have no problems when it comes to declaring themselves  “conservatives” (they do not like to speak of the right or the left) will accelerate these processes to the maximum each time they achieve an absolute majority. We saw it in the privatizations of large public companies during the governement of  Aznar, the experience of so many years in the Community of Madrid, or in Rajoy´s first term. But the parties that, without conviction, keep referring to themselves as "socialist-democrats", in reality never go beyond being social-liberals. In this way, we know that the privatizations that Aznar carried out with were only the second chapter of those started by Felipe González; the Law 15/97 that allowed the incursion of private companies in Public Health was supported in Parliament by the PP, the PSOE, CiU, PNV and CC; and the Rajoy labor reform of 2012 only pound deeper the nails that the Zapatero reform of 2010 already had put there. Nowadays, Pedro Sánchez boasts to whoever wants to listen to him that the funds from Brussels destined for healthcare will be channel through the so-called “public-private partnership”. He uses the same terminology when referring to the funds destined to the manufacture of batteries.


Public health services or private profits, there is no middle ground.

Therefore, healthcare problems are not specific to the Community of Madrid. In many cases, Madrid, Catalonia or the Valencian Community have served as test labs for policies that have later spread throughout the State or have been consolidated at national level. The construction and private management of hospitals and staff financed by public health services, the transfer of medical tests to private laboratories, the outsourcing of cleaning, food or maintenance services, clinical management units or co-payment are disastrous elements that have been standardized in over the last few decades at all levels of the administrations. Opening a new battle front, the Community of Madrid has begun to reduce the salaries for public medical staff, forcing these professionals to move to other Communities where they get better salaries. But the markets level down, and we will see in a few years how the low wages have become standard throughout the state with no possibility of escape.

The COVID-19 pandemic, far from serving to raise the standards of the public health service, as many naive people expected at the beginning, has meant an acceleration of the privatization processes we have mentioned. If we workers arrive at this crossroads without the class consciousness or the necessary organization to understand that we are victims of an attack launched by the capitalist class on an important par of our salary, it will be impossible for us to stand up from the political position that the situation requires. And we can be sure that the political position does not consist of having some lefties who claim to be sitting in "power" on our behalf. European funds and “modernization” plans will only serve to speed up the privatization processes.

We all have been able to see how the famous "digitization" works. Phones from which we get no response, telematic consultations in which the doctor (the one that is on duty that day) cannot make a real diagnosis or derive you to a specialist; call center workers without the proper training, who put you off or shuttle your call back and forth without solving anything. What started under the justification of an unexpected pandemic is trying to take hold as a way to generate gigantic savings in facilities, personnel and attention. But in order to force patients to comply with remote medical assistance, it is necessary to close down the health centers. Thus, primary care centers in the Community of Madrid have been operating without emergency services for more than a year. Now, going one step further, it has been announced that this summer up to 41 primary health centers will be closed to save on doctors who should replace those on holiday leave. The excuse could be anyone, but the purpose is clear: to set the precedent that healthcare centers can be closed down.

No one will take into account the reduction in life expectancy and quality of life derived from the late detection and treatment of medical problems. The only thing that will be measured will be the savings in healthcare services (indirect salary) and the profits generated by those who decide to jump from public to private medical attention.

Because the intentional degradation of public health services means that those who can afford it, end up giving in and choosing the individual solution. Madrid is the Community with the highest number of inhabitants who have taken out private insurance. At the end of 2020, no less than 37% of Madrid population had covered themselves with paid health insurance. Catalonia is followed by a distance with 32%. But the phenomenon has spread throughout the country. If spending on other types of insurance was reduced during the pandemic, almost half a million Spanish people took out new health insurance in 2020.

If we come to understand the magnitude of the bet, we will understand that there are no individual or sectoral solutions. No one can avoid the problem in the future by being able to pay, at the age of 40, for private insurance that covers only the simplest (and cheapest) treatments. It is not a mere problem of salary, differences between regions or that the novice doctors are treated differently. It is not about the just - and isolated - struggle of outsourced workers who fight to be part of the staff again, or temporary workers who seek job stability. Nor can it be reduced to the demands of the users of a service. It is about all these things in unison and much more: we have already seen that our need to defend health services has the same roots as the fight to maintain and improve pensions or to demand better and wider access to any other public service.

To carry out an effective struggle requires raising our level of organization as members of the working class, since what we face is the attack of another class: the capitalists. Now it's time to keep the primary health centers open, but it is just another chapter in the permanent and inevitable dispute between wages and corporate profits. 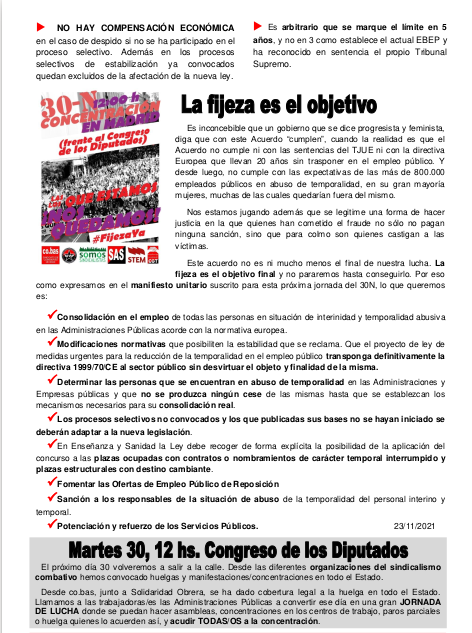